Back to the Future

So Gordon Brown has took a trip back in time in his new cabinet reshuffle.

And the shock recall has been the EU trade commissioner Peter Mandelson as Business Secretary.

Peter Mandelson, a serial resigner from Cabinet in the past, will become a Lord to take the role.

Just how desperate is Gordon Brown? Appointing a controversial arch-Blairite with a history of trouble to his cabinet. Why??

Is Mandelson to become the new fall guy in the Cabinet, taking the heat from the Prime Minister?

How long will he last this time? And how will the public react?

So once again the Scottish Secretary is a full time job, as it was in the past.

Although it had been rumoured that the job was to be merged with the Northern Ireland and Wales job, as I hinted at in a previous article it would have been better for the Unionists to keep the jobs separate to try and thwart the nationalist advance in Scotland and Wales.

Just in time to preside over the Glenrothes by-election and Motherwell and Wishaw by-election then.

To me, Jim Murphy’s voice just sounds like the Rev I.M. Jolly; especially when the minister had been partaking on the whisky. Its not what I would call upbeat!

So I look forward to hearing him explaining away the forthcoming by-election results. 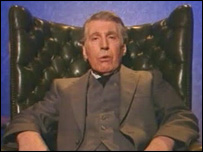 “Ah’ve had a helluva year!”

Even if Labour somehow manage to win them both, his voice would send Labour activists jumping off the Erskine Bridge.

In another reshuffle, Alistair Campbell, former Press Officer for Tony Blair, returns to the Labour Government as external advisor.

So its back with Campbell and Mandelson then. The only person missing is Tony Blair and we’d be right back in the Nineties again. Of course, regular readers will recall I pointed out that Labour activists were calling for his return only just recently.

We couldn’t get any more ‘Back to the Future’ if Gordon Brown had arrived at 10 Downing Street in a De Lorean.

He must feel like Marty McFly fading away on stage, awaiting for the public to embrace the New Labour message.

Its a pity for him that we’re on the same trip as he is. Lightning won’t strike that clock tower twice!